MADRID — Spain’s governing Popular Party was drawn deeper into a web of corruption scandals this past week, after the Swiss authorities informed the Spanish judiciary that the party’s former treasurer had amassed as much as 22 million euros, or $29 million, in Swiss bank accounts.

The treasurer, Luis Bárcenas, resigned from his job in 2009, after being indicted in the early stages of an investigation, which is still ongoing, into a scheme of kickbacks and illegal payments allegedly involving other conservative party politicians. 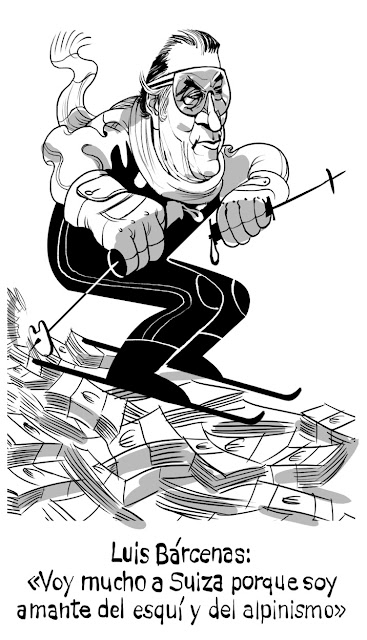 Mr. Bárcenas has said that he is innocent and that the Swiss accounts were held on behalf of investors. The Popular Party, too, denied any link to the money. Alfonso Alonso, the party’s parliamentary spokesman, said at a news conference this past week that he and other party members were “outraged” by the discovery and called on the prosecuting judge to pursue the case “to the end.”

Nonetheless, the revelations have brought a fast-growing list of corruption investigations, which have unspooled across Spain, to the doorstep of the conservative government of Prime Minister Mariano Rajoy, who has so far remained silent. About 300 Spanish politicians from across the party spectrum have been indicted or charged in corruption investigations since the start of the financial crisis. Few have been sentenced so far.

Many of the investigations focus on real estate or infrastructure deals made during a decade-long construction boom that was brought to an abrupt end in 2008 by the world financial crisis, in which transactions were masterminded by property entrepreneurs, facilitated by local politicians and recklessly financed by regional banks.

However, some of the cases have involved bribes, embezzlement and tax evasion unrelated to the construction frenzy. Instead, they have tainted the upper echelons of Spanish society as well as the country’s institutional fabric, from the monarchy to the Supreme Court.

Iñaki Urdangarin, the son-in-law of King Juan Carlos, became the first member of the royal family to appear in court last year, as part of an ongoing investigation into whether he and some business associates siphoned off millions of euros from tourism and sports events. Meanwhile, Chief Justice Carlos Dívar resigned last June after being accused by a fellow judge of claiming several vacations as business expenses.

“I believe that the level of corruption that we’re now uncovering is well beyond anything that we had, at least in living memory,” said Alfonso Osorio, the president of BDO Spain, an auditing firm. “This corruption is sending the message that anything goes in the country, which could also really hurt Spain’s image around the world.”

The Swiss money held by Mr. Bárcenas gave fresh ammunition to the main opposition Socialist Party, whose leader, Alfredo Pérez Rubalcaba, called on Mr. Rajoy “to come out and give a public explanation” in response to the “huge social alarm” that news of the secret Swiss funds had sparked.

Mr. Rajoy has not responded so far. He has also steered clear of commenting on fraud charges against other politicians in his native region of Galicia. Ángel Currás, the conservative mayor of Galicia’s capital city, Santiago de Compostela, was charged this month as part of a widening investigation into illegal public works contracts awarded across the region. Mr. Currás denies wrongdoing and has refused to step down.

The Socialists, however, have also been embroiled in several scandals, particularly in their stronghold of Andalusia, Spain’s largest region, where prosecutors have accused some local officials of paying fictitious early retirement benefits to relatives and friends.

Meanwhile, in the independent-minded Catalonia, corruption and money-laundering investigations have also recently put the spotlight on some prominent politicians from the region’s governing Convergència i Unió party.
Publicado por Inclasificable en 11:57